Fatigue... of the metal variety

This was the chainplate from an old aluminium open 60 I skippered. This happened before I joined on the voyage back from South Georgia to the Falklands. The boat got badly knocked down and the cap shroud hole in the chainplate pulled out, resulting in the mast getting a rather nasty bend just above the 1st spreader (it was amazing that they didn't loose it!). It took the resourceful Falkland islanders 10 days or so to pull the mast out, straighten it, sleeve the distorted area and re-install it (an amazing job...) While they were at it they welded in a set of massive new chainplates. All done with very basic facilitys. As you can imagine we had our hands full cleaning up the boat and fixing the million and one other broken things from the knockdown. 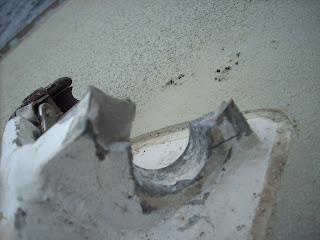 Also broken was the staysail stay chainplate, you can clearly see another crack underneath the point of failure. This thing was just waiting for an excuse to let go, and it failed before the knockdown... 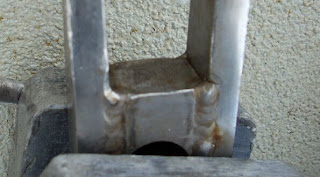 A full inspection revealed a crack starting in the stainless steel solent stay fitting (right side, at the top of the weld), This is a common place for failure, right near the heat affected zone, just outside a weld. Once the crack starts it concentrates loads at this point creating a stress riser and accelerating failure, also nasty things like crevice corrosion can start inside the crack, eating further into the metal.... 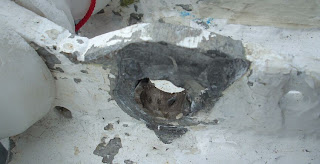 The forestay chainplate wasn't too crash hot either... lets not push her too hard...

The point of all this is not to bag out the boat, just to say that on older boats don't assume that just because things have not broken, doesn't mean to say they won't. Metal fatigue and corrosion can invisibly weaken parts that otherwise look solid. The Open 60 had a complete new rig 7 years before this, but the chainplates were over 20 years old, and possibly slightly underspecified to start with. She had had a hard life, alot of it in Antarctica, (cold may accelerate fatigue - any engineers out there?). Nobody had thought the solid looking welded in chainplates could give any problems....

The most highly loaded parts of any boat are normally the rigging and what they are attached to (and maybe the keel bolts...). Sailors are well aware of the need to replace stainless steel shrouds every 7-10 years or so, but many fail to realise that the rest of the load path is also highly stressed and subject to fatigue. Quite commonly people replace the wire religiously (to keep insurance company's happy..) but never change the highly loaded through mast tang bolts, or the tangs themselves... The tang bolts particularly seem to fail quite often, then dropping both port and starboard shrouds, meaning you can't even tack to stabilise the mast.... Turnbuckles also need replacing every so often, as can the chainplates.

To be really safe I think it makes sense to consider replacing all the components every 2nd rigging change (20 years or so) and very carefully inspect all components at every rigging change. Chainplates should either be massively oversize, or easily replaceable. Be very wary of any stainless that passes through a damp deck, stainless can corrode very quickly in a damp low oxygen environment.

I replaced some U Bolt chainplates as a precaution before a delivery, and was horrified to find two of the ones I removed had lost 90% of the metal due to corrosion, they had looked perfect.... Lucky I had been told to watch out for this by a friend who had one fail on his boat. Stainless is treacherous stuff....

My chainplates are mild steel (with SS edging and inserts) to reduce the problems with fatigue. Mild steel has some pretty forgiving properties, one being that if you keep the stress below a certain point (the endurance limit) it doesn't really fatigue, unlike most other materials which will always get slowly weaker with each load cycle (that year of mechanical engineering was useful after all!). My bottlescrews are also galvanised steel, as is my rigging wire - both come with industrial test certificates and a SWL (unavailable for yachting stuff...). When I next re-rig my boat I will replace my stainless tangs with galvanised mild steel mast fittings as well.

There are some non destructive ways to test for cracks, but they are not 100% and could give you a false sense of security. I normally use a magnifying glass and look carefully, but I really should invest in some dye penetrant and developer, this supposedly highlights any cracks, has anyone used it?

Anyway I guess I have just given you yet another thing to worry about... Thats good if it means you might be less likely to loose your mast. If anyone has had a rigging failure I would be very interested to hear all about it....